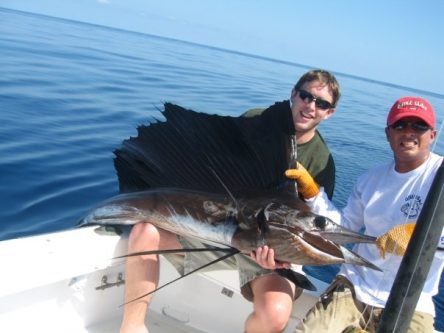 You sure can eat a sailfish, but should you? Sailfish are most often caught for sport and not for food. In the United States, federal regulation is catch and release only. This rule makes eating one a little tricky unless you have a special permit.

Outside of the states, it is still commonplace to eat sailfish. The high volume of commercial fishing is why this species is dwindling in parts of the world.

In this article, we will explain the dos and don’ts of catching and consuming sailfish. Plus, a few tips and tricks on cooking them if you get the chance.

Contents hide
1 What is a Sailfish?
1.1 Fun facts about sailfish:
2 Is Catching Sailfish Legal?
3 Where Can I Catch a Sailfish?
4 Is Sailfish Healthy For You?
5 How Do I Cook Sailfish?
5.1 Popular ways to prepare sailfish:

What is a Sailfish?

A sailfish often gets confused with a swordfish because of their similar appearance. This misunderstanding is also why they are called billfish in certain fishing communities.

The name sailfish comes from their oversized dorsal fin that resembles a boat sail. Sometimes their sail can be taller than the length of their bodies.

Clearly, there was no overthinking involved while naming this breed, but at least it’s to the point.

The Billfish Conservation Act protects sailfish and many other similar species in the United States. They are a highly prized game fish, so catching them is not illegal. Still, federal regulations prohibit removing them from the water before release. You can get the proper licensing to harvest billfish, but only if you accurately report your catches to regulatory agencies.

Obviously, this doesn’t stop all fishermen from ignoring the rules that protect the fish. Taking a photo with your catch of the day is pretty standard when it comes to fishing. However, if the picture catches the eye of an authority figure, it can mean a fine of $500 or more.

Many people don’t realize how much stress the sailfish experiences when removed from the water. When a fish that size is still enough for a picture, that usually means its survival rate is bleak. Some fishermen justify taking sailfish out of the water by claiming revival is a possibility. Even if that’s true, I doubt that makes the fish feel any better.

Where Can I Catch a Sailfish?

According to several websites with expertise in fishing, these ten spots are your best bet at catching a sailfish. You won’t be able to fish for your dinner in Florida, but in most other locations, you can.

It’s also a great excuse to take a vacation!

Is Sailfish Healthy For You?

You would need to consume a great deal of fish that’s high in mercury to be in real danger, but it’s still good to know what you’re putting in your body.

The FDA tells us not to eat shark, swordfish, king mackerel, and tilefish due to high mercury levels. While the sailfish isn’t explicitly named, there is plenty of debate about how healthy it is.

Without a doubt, it’s much safer than eating a blowfish, so no need to worry about imminent death. Like with any food, moderation is key.

How Do I Cook Sailfish?

Sailfish aren’t known for being delicious and easy to cook. Similar to tuna and swordfish, they have a meatier consistency but with a less palatable flavor. You’ll need to put in some extra leg work to prepare a tasty meal.

In areas like Zihuatanejo, Mexico, sailfish are common in fish tacos, smoked fish dip, or ceviche. Traditional methods like baking, frying, and grilling are also a good choice.

The fishy flavor of sailfish ranges from mild to heavy, so most recipes recommend letting the fish soak in brine, milk, or butter. Soaking your fish also helps infuse some flavor into your fish! Don’t be afraid of spices when it comes to sailfish.